Each morning the suns serene rays cast a magical glow on the majestic Kangchenjunga, as it slowly spreads across Denzong valley of rice. Many flowers are born to bloom unseen in the lush forests and mountain air of Sikkim. (Sikkimese quote)

Situated in the northeastern part of India, Sikkim is a special place, tiny on the Himalayan scale, but indisputably beautiful – sub tropical forests, fast flowing rivers and cardamom fields framed in an abundance of Rhododendron and with the 3rd highest mountain in the world, Kangchenjunga, dominating from every corner. Sikkim is also a land of spirituality with several major monasteries where monks practice the ancient rituals of Tantric Buddhism.

This tiny kingdom remained independent until 1975 when it became the 22nd state of India. The Lepchas, a tribal people thought to have migrated from Assam in the 13th centaury, originally populated Sikkim. With the migration of the Tibetans to Sikkim in the 17th centaury, the Lepchas were forced to move to more remote regions. Today Lepchas, Tibetans and Nepalese inhabit Sikkim.

By train: There are several trains from Delhi and Calcutta to New Jalpaiguri (Siliguri). From Delhi there is a choice of: North East Express (28hrs), Mahananda and Bhramaputra (32 hrs) and Rajdhani Express (24 hrs). Train reservations should be made ahead of time as trains are often fully booked.

By air: There are flights from Delhi and Calcutta to Bagdogra airport (Siliguri). From Siliguri take a bus or taxi to Darjeeling (3-4 hrs). It is also possible to go directly to Gangtok from Siliguri(5hrs).

A special permit is required for visitors to Sikkim. You can apply for the permit at the same time that you apply for your Indian visa or you can obtain it from the District Magistrate Office in Darjeeling. The permit is valid for only15 days, but an extension can be obtained in Gangtok. 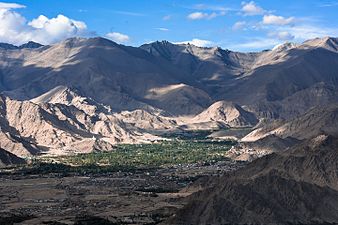 Jhunglam, which means the middle way in Ladakhi is one of the most adventurous and isolated treks in Ladakh. The valley of Sham, in the lower part of Ladakh, is celebrated for its beauty and richness during the harvest. A beautiful trek through a less-frequented area of Ladakh, this route follows the same trail as on the Markha trek for the first 3 days.